Business critical computers need a secure offsite backup to prevent data loss in case of disaster such as flood or fire. The ability to restore these machines is of prime importance to any industry. IBackup enables you to backup vital system related components that can be restored seamlessly during a disaster. 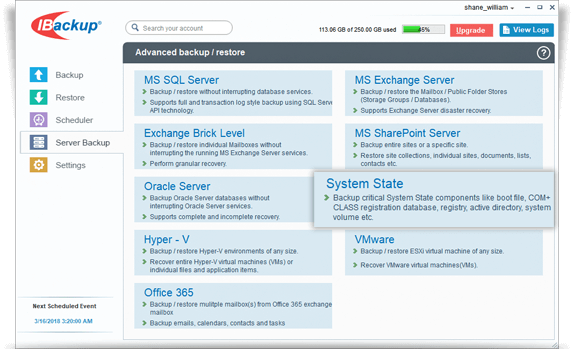 System components such as registry, boot file, active directory and system volume can be quickly backed up to a secure offsite location. These components can be backed up without interrupting active applications on the systems thus ensuring zero downtime.

View the steps to backup System State to the IBackup account.

Ensure your business critical systems are up and running after system failures, by seamlessly restoring all system state components quickly.

View the steps to restore System State from the IBackup account.

The following components are backed up:


If the system is a domain controller, the following components are backed up:


If the system is a certificate server, then the related data is also backed up.